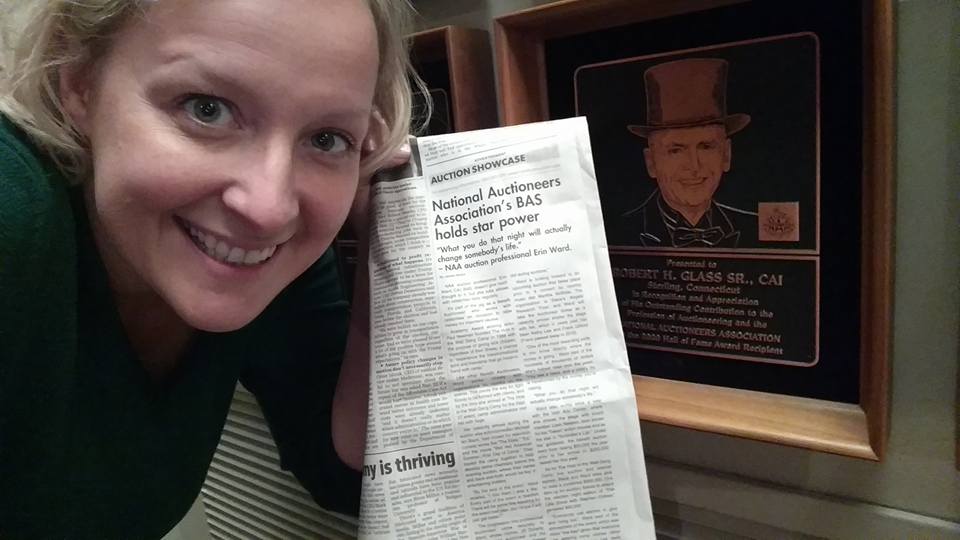 “NAA auction professional Erin Ward, CAI, BAS, doesn’t give much thought to it, but she rubs elbows with celebrities fairly regularly.

It’s part of the gig as a Benefit Auctioneer who works with celebrities on occasion to raise money for important causes.

Academy Award winning actor Paul newman founded The Hold in the Wall Gang Camp in 1988 with the purpose of giving sick children, regardless of their illness, a chance to “experience the transformational spirit and friendship that go hand-in-hand with camp.”

Her celebrity emcee during the auction was actor/comedian Michael Ian Black, best known for television comedy series like “The State,” “Ed,” and the movie “Wet Hot American Summer: First Day of Camp.” They toured the camp together to help develop some chemistry before the evening auction, where their banter and back-and-forth would be key in entertaining bidders.

“By the end of the event,” Ward recalled, “I told them I was a lifer. Every part of the event is heartfelt. There will be some fine tweaking for the event next year, but I know it will just get better.”

The progression into professional auctioneer came naturally to Ward, whose mother, Jill Doherty, is an estate auctioneer and the 2002 NAA International Auctioneer Championship Women’s Division Champion. Per her mom’s career choice, Ward attended many auctions as a child.

“I loved going with her to auctions,” Ward recalled. “My passion was working with non-profits, so I knew if I specialized in that area, I could bring more to it. I told my mom I never wanted to get as dirty as she did during auctions.”

Ward is looking forward to an upcoming auction that takes place prior to a concert music star Martina McBride. The organization is Dana’s ANgels Research Trust, and Ward will take the Auctioneer duties as a celebrity emcee shares the stage with her, which in years past has been Kathy Lee and Frank Gifford (Frank passed away in 2015).

“One of the most rewarding parts is you know directly where the money is going,” Ward said of the hundreds of thousands of dollars she’s helped raise over the years. “You see a need, and a child’s life is transformed by the money you’re raising. What you do that night will actually change somebody’s life.”

Ward also works once a year with the Irish Arts Center, where she shares the stage with board member Liam Neeson, best known for his “Taken” action movies and as a star in “Shindler’s List.” Under her guidance, the benefit auction went from raising $50,000 the year prior to her arrival to $250,000 raised her first year.

As for the Hole in the Wall Gang Camp live action and appeal, Black and Ward were able to raise a combined $665,000. One item up for auction, tickets to attend the election night edition of “The Late Show with Stephen Colbert,” garnered $60,000.

“Everybody just wanted to give and hang out,” Ward said of the atmosphere of the event, which was more “low key” given that everyone was wearing camp clothes rather than tuxedos. “It was just really cool to see so much heart from that group. It’s easy to get lost in details, but this event focused on kids and the love everyone had for them.”

To find an NAA BAS or other auction professional in your area, visit auctioneers.org/find-auctioneer.”